Does Lucifer look human or does he have red skin, a tail, and horns? 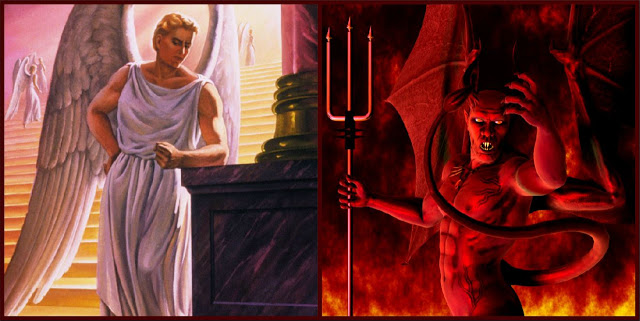 –
He does NOT have Red Skin, a Tail, or Horns and nor does he have a Pitch Fork.
–
On the Right: The idea of Lucifer having Red Skin, a Tail, and Horns came from the christians. They made him look like this because they believe and think he is evil. I have encountered christians who have said that Lucifer wants to kill, steal, and destroy. Oh yes and the fire around him to make it look like he wants to send people to “hell” burn them and to torture them. The idea of hell came from the christians to scare those so they can stay and keep following god. There are a lot christian ideas about Lucifer that are complete lies just to keep people from ever wanting to follow Lucifer in the future.

On the Left: It is true that Lucifer looks human just like us, but he DOES NOT have a physical body like we do in this mortal world. In the Premortal World, all spirits looks like us but they do not have physical body. And of course no spirit has wings.

I do know for sure that there are some Satanists who see Lucifer as the red skin guy which is kind of like really? WTF!?