What’s the point of God’s plans?

Does god really have plans for everyone? If he did have plans for those then why are those people suffering? Many Christians say god has plan for you that will lead you through the steps through life and through eternity after you die. If he did have a plan then why would he let people get cancer, diseases, and viruses? What kind of god would let his people get sick. Also, they say god has a purpose for us in life. If he did then why does he let bad things happen to them? Why does he let them get raped, tortured, hit, beaten up till they have bruises all over themselves, starve to death, and etc.

For example, if Christians say that Satan “Burns people in hell” then why does god let that happen? If he cared enough he wouldn’t want that to happen to his people. So god doesn’t really care for his people. In general, if he cared he would have been watching out for his people but instead he watches people suffer while he just sits there doing nothing. In reality, Lucifer DOES NOT burn people, he doesn’t throw people in a pit of fire. That is all lies from the holy bible. It is only said to make them fear Lucifer; so they can stay with god. 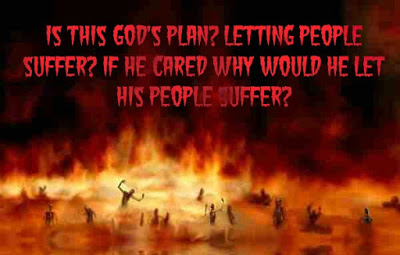