When I still had feelings for Lucifer – In 2013

It was when I was still a christian orthodox, there was a moment that I felt a love for him but sadly I kept myself brainwashed by all the christian bullshit which kept me apart from him. I remember when I was hanging out with a friend and I remember she said something like “What would you do if you Lucifer standing over there alone?”, I actually felt bad and I lied to her saying that I would leave him there alone to only hide those feelings. I remember that I actually pictured him standing alone which brought emotion to the heart (A picture of him I remembered from the Paradise Lost -Gustave Dore-). In reality, if I did see Lucifer standing there alone, I would have walked towards him.
– 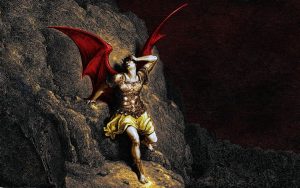 –
The thought of him standing there alone, wouldn’t it bring a lot of emotion and sadness?
–
It was a while back, I remembered thinking about that and it was when I actually realized that I still had a love for Lucifer. My heart was meant to follow this path and to follow Lucifer’s truth. I could honestly say that I really made a major mistake by letting myself get deceived and lied to by coming back to christianity. The feeling of when I left this path did hurt deep inside of me. I surely did regret it for quite some time.
–
Even though, I did have regrets of leaving this path, it is a feeling that I have that Lucifer would not want to me regret it but to move on and to look forward to what is going to come while I am on this path right now.
–
-Luciferi Baphomet