Why I am a Satanist

There are numerous reasons why I am a Satanist. Throughout the years being in the Satanic path, I have learned a lot and gain much knowledge to understand where I really am.
My dislikes for Abrahamic Religions
–

I have learned that all of the Abrahamic Religions only want you to follow their “laws” because they feel they are the “one true religion”, but are they really that “One True Religion“? While the abrahamic religions do not have any morals, we Satanists have morals.

To never forget how evil those Abrahamic Religions are… they want to murder all of those who are not a follower of their god. But they rather ignore that verse “Thou Shalt Not Kill” or is it that god only wants to use his followers as puppets to do his dirty work to murder those who do not wish to follow him? Maybe god wants them to think it is “ok” to kill those who are not one of his followers? I am not fond of how they really are, they disgust me, and I wish those abrahamic religions never existed in the first place. They have caused so much chaos in this world that it has turned many into violent human beings by brainwashing them.

When I came back to follow Lucifer again, I started to see how things truly are. While following Lucifer, I have learned a lot, I have started to understand who he really was and what he was really like. He has truly guided me far to a distance where I have never imagined before. But to understand how wonderful and kind he is, you must learn the truth about him and to start working with him. While working with him he has taught me a lot and gained much knowledge from him. But it was last year during the summer, it felt like I got more closer to him. It truly did feel like our bond has gotten a stronger connection, a stronger connection that not even god can ever break.

Lucifer won’t judge you for being part of the LGBTQ+

Lucifer won’t force you to follow him, but god will 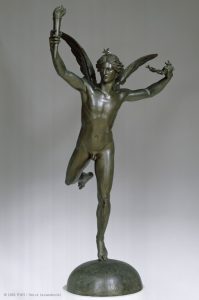 I am not exactly sure if that is an actual statue of Lucifer, but I see it as a very close resemblance with the statue holding a torch and holding a broken chain. I did not take this picture, I found it on google images, If you search PARIS L’ANGE DE LA BASTILLE you find images like this on there.
–

While those who feel that Lucifer wanted more power than god, he never wanted more power than god. The lie about Lucifer wanting more power than god was to make him seen as evil by others. The great secret is that this lie was made up by god himself so that he could take the power, strength, and pleasure of his children without interference. The one known as god is a selfish evil being who wants everyone to follow his laws and his beliefs to keep feeding him their power, strength, and pleasure. Lucifer wants to liberate as many as he can from being a slave to god, but all still have their choice and can elect to follow god, Lucifer will let them be because he will not force or threaten anyone who doesn’t want to follow the path of freedom. Contrast this with god, who threatens all that will not bow their knee to him and enter into his slavery.

When you realize this, Lucifer does have way more morals than god does. Lucifer merely wants to guide any that will hear to the correct path of freedom, power, and enlightenment.

Lucifer never lies to his followers, but god will do to his
–

Many christians believe that Lucifer is the “Father of Lies”. But is he really the Father of Lies? That is the question a christian needs to ask themselves. Another question they need to ask themselves is, if you haven’t worked with him then why should you believe that he is evil without having any valid evidence or reason? The bible is not valid evidence of Lucifer causing evil because every single word in the bible are all lies from god.

To believe that god would never lie to you… you will need to rethink that. He is not honest with you or any of the others who follow him. Do not be so gullible what he tells you, if you listen to everything he says he will have more power over you to control you and your whole life. To let him have control over you and your whole life would surely make you feel very miserable, and that is not the kind of life you would not want to live. Live for Liberation, not for being a slave to god. Follow someone who would never lie to you and would always be honest with you. Honesty is what Lucifer loves the most.

If you would like to know how I became a Satanist you can read My Testimony to Father, Lucifer

My testimony to father Lucifer